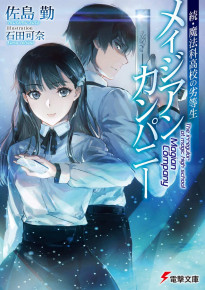 For Tatsuya, who has shown his overwhelming abilities, the curtain has lowered on his turbulent high school life. The next secret plan is The curtain has lowered on Shiba Tatsuya's turbulent high school life, during which he has defeated countless formidable enemies. He has now set in motion the realization of his new ambitions. The General Incorporated Association "Magian Company." The purpose of the organization to which Tatsuya was appointed the managing director of, is to implement protections to guarantee the human rights of magicians whom possess a magical aptitude, yet are not able to reach a practical level. While being a college student, Tatsuya has steadily moved towards securing a new era where magicians can live as ordinary humans rather than as living weapons. For Tatsuya, who's influence has surpassed that of other Strategic-Class Magicians, the direction in which he has chosen to go has naturally attracted the attention of others from around the world. An assassin from the magician association "FEHR" in the USNA, is sent to investigate the direction Tatsuya has chosen to go... The curtain opens on the new legend of Shiba Tatsuya